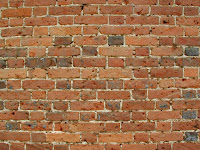 There's the wall.
This is one of those ancient texts that just isn't easy for us to swallow. I say I believe those words and yet when push comes to shove, I don't really act like it. Rubbish? Do I really consider everything in my life as second to Christ? And not just second but far enough down the priority list to be counted as LOSS, liability, crap? That's what's so hard. I believe the verse, but don't always connect that belief to my actions. What I've got to remember is that I don't have to figure it all out and I don't have to do it all on my own. Philippians 4:13 says, "I can do all things through Christ who strengthens me." (there's another one of those verses...) And so I trust and push against the wall with all my might - knowing that in reality, it's not my strength that will cause the wall to crumble but His.
Posted by jason at 5:54 AM