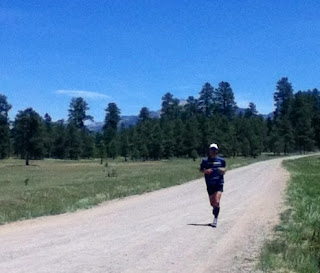 I couldn't have asked for a better day!   The weather was great, the smoke from the fire just north of the course wasn't a factor and conditions were perfect.    The 4th Annual Turkey Trail Marathon is held just outside of West Pagosa on a section of local trails and forest roads.    GECKO puts it on which is a non-profit that works to give children an opportunity to get outside and experience the outdoors.   They put on several races in this area this year from running and mountain biking to a couple of new CX races coming up this fall.

The course was a 13.5 mile loop that we did clockwise and then counterclockwise (marathoner's).   I had 13.5 on each trip so I'm pretty sure the course was slightly long, which at the end always matters.  The race started at 9am, an hour later than originally planned but giving enough time for morning winds to clear out any smoke that might have settled in the area from the fire.

I started out with a fairly quick pace.   The first 6-7miles is a relatively quick descent and I was feeling pretty good.    There was a group of 5-6 half marathoner's in front of me but I was pretty sure I was the only marathoner in the bunch.    I picked up a couple of them along the way to the turn around and passed a really quick local runner that was having an off day.  He eventually dropped but would have been a strong contender for the marathon.  I couldn't really tell how far of a lead I had and until I hit the turn around I wasn't actually that I was in the lead.    I hit the turnaroud at 1:43:12.

The return trip was relatively uneventful other than just painful.   It was hotter, the climb, though slight, was rough and I had some cramping in my left leg that slowed me down.    My return split was 1:51:42.   My official time was 3:34:59. 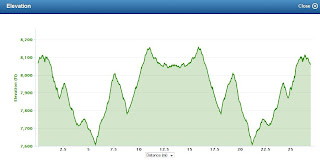 It felt pretty good to win my first trail marathon.   I ran well and felt strong throughout most of the race.   My goal to really push the last 6 miles didn't necessarily play out the way I'd hoped but I'm not complaining!   I'm getting more comfortable with being out in the lead pack more often and how to create my own race strategy as the race unfolds.

All in all, it was a great day.  My wife, mother-in-law and brother in law and his wife and their son all got to be at the finish and the awards ceremony which was an extra special treat!